Lung cancer is the leading cause of cancer in men and the second most common cancer in women. It usually begins in the cells lining the airways.

There are two types of lung cancer:

About 10 to 15 per cent of all lung cancers are small cell lung cancer (SCLC). Heavy smokers are more likely to get this type of cancer. It often starts in the bronchi near the center of the chest, and spreads widely through the body very early in the course of the disease.

About 85 to 90 per cent of lung cancers are non-small cell lung cancer (NSCLC). This cancer can be further classified into three subtypes based on their size, shape, and chemical make-up:

How Lung Cancer is Assessed 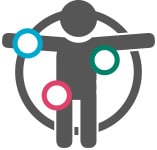 To plan for your treatment, your doctor needs to know the type of lung cancer and the extent (stage) of the disease by using a variety of tests. These may involve imaging procedures that allow your doctor to check the extent of your cancer. These include CT, MRI, positron emission tomography (PET) and bone scans.

Talk to a doctor to find out which procedures are suitable for you.

Your treatment and prognosis depends on the cancer’s stage. Depending on the stage of the disease and other factors, the main treatment options for people with lung cancer include:

Surgery is the standard treatment for the early stages of NSCLC, and also provides the best chance to cure the disease. This procedure removes cancer from the lungs, along with some surrounding lung tissue.

There are several surgical options to remove lung cancer cells:

This treatment may be used together with surgery or chemotherapy. It can also be used as a palliative treatment to relieve pain caused by lung cancer, or to relieve symptoms caused by it.

Chemotherapy involves giving you anti-cancer drugs. They are either injected into your vein intravenously, or orally. These drugs enter your bloodstream and target rapidly-dividing cells, making this treatment useful for cancer that has spread (metastasised) to other organs.

Depending on the stage of lung cancer, chemotherapy may be used to:

Doctors give chemotherapy in cycles, with each period of treatment followed by a rest period to allow the body time to recover. Chemotherapy cycles generally last between three to four weeks, and a course of treatment typically lasts between four to six cycles.

Depending on your drug, you may experience different (and less severe) side effects. They can either be used together with chemotherapy, or if chemotherapy is no longer working.

Immunotherapy uses the body’s own immune system to attempt to control the cancer, and it is effective against certain types of advanced lung cancer which express the marker PDL1, as well as smokers with squamous cell cancers.

For patients who have completed chemotherapy and / or radiation treatment, immunotherapy may also be useful to further control the underlying cancer.

While immunotherapy is generally well tolerated by most patients, some may experience serious side effects.

Talk to us to understand more about the different treatment options, and find out which treatment combinations are most suitable for you.

After your treatment is over, it is important to keep all follow-up appointments. This is needed to check for cancer recurrence or spread, as well as side effects of certain treatments. You can also use the chance to discuss any questions or concerns with your healthcare team. Most doctors recommend follow-up visits and CT scans every four to six months for the first two years after treatment, followed up with yearly CT scans.