Health At Your Fingertips: What Your Nails Can Tell About Your Health 10 abnormal nail conditions and what they can signify.

A common condition where the nail separates from the nail bed. This usually starts at the tip of the nail.

The most common cause is trauma, including minor, repetitive trauma such as frequent tapping of long fingernails on a keyboard.

Fungal infections and psoriasis – a skin condition characterised by scaly patches on the skin – are also frequent causes, although they are often linked with thickening and yellowing of the nails.

Fungal nail infection is the most common cause. Often, the nails would thicken and feel crumbly, with debris underneath.

In rare cases, yellow nails can indicate a more serious condition, such as severe thyroid disease, lung disease or diabetes.

This can signal an underlying serious illness, such as anaemia (a condition in which your blood has an abnormally low number of red blood cells), heart failure, liver disease and malnutrition.

Pitting on the nails

These are small dents or depressions on the nail surface.

It is common in people who have psoriasis. It could also be an early sign of reactive arthritis (joint pain and swelling that develop in response to an infection in another part of your body) or alopecia areata, an autoimmune disease that causes hair loss.

“Although nail changes accompany many conditions, many of these abnormalities are harmless – for instance, not everyone with white nails has liver disease”

These are grooves or indentations that run across the nails. They can appear when the growth at the base of the nail is interrupted by injury or a severe illness. The conditions associated with Beau’s lines include:

These grooves tend to be visible a few months after these conditions happen. That is when the nails have grown and the grooves have moved up the nails to become visible.

Also known as koilonychia, they are usually caused by iron-deficiency anaemia, which occurs when a lack of iron leads to a reduced number of red blood cells in the body.

Other less common causes of this nail abnormality include: 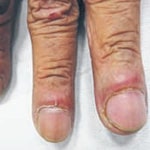 Clubbing of the Nails

This occurs when the tips of the fingers enlarge and the nails curve around the fingertips, usually over the course of a few years.

It is sometimes the result of low oxygen levels in the blood, and could point to problems with the lungs, bowels or heart.

These are often just signs of ageing or long-term exposure to water or chemicals, such as detergents and nail polish.

However, brittle nails can also be caused by a fungal nail infection, thyroid diseases and nail psoriasis. 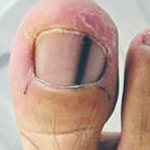 Dark stripes down the nail

This is known as longitudinal melanonychia and is fairly common in people with darker skin.

However, the dark stripes could also be a form of skin cancer that affects the nail bed, called melanoma.

Consult your dermatologist to rule this out.

Biting your nails is usually an old habit, but in some cases, it points to persistent anxiety. Nail-biting or picking has also been linked to psychological problems, including obsessive-compulsive disorder.

If your nail-biting persists along with anxiety and stress, discuss this with your doctor.